Growing up, I remember my parents having a real interest in home decor. We had a room in our house that was sort of ‘off limits’. Really, we were just encouraged to play elsewhere. It had plush white couches and glass top tables. My brother and I were certainly active kids, but we were also not super rambunctious. As I got older, we inherited several of my great-grandmother’s antiques and I started to gain an appreciation for vintage furniture and collectables.

Fast forward and I am not only an interior designer myself, but most importantly – a mom to three pretty rambunctious kids! They’re amazing, but busy, growing and learning. Of course, I care about how my house looks and feels. I also would like to mitigate emergency room visits if I can. So my approach to furniture selection is calculated.

You also have to know your kids. My parents felt comfortable with white couches, I certainly wouldn’t. However, I know our lifestyle and routine so I feel comfortable making some choices maybe other families would not. I’m sharing some of my lessons learned and tips to help you create a space that looks beautiful but is also approachable for your family. 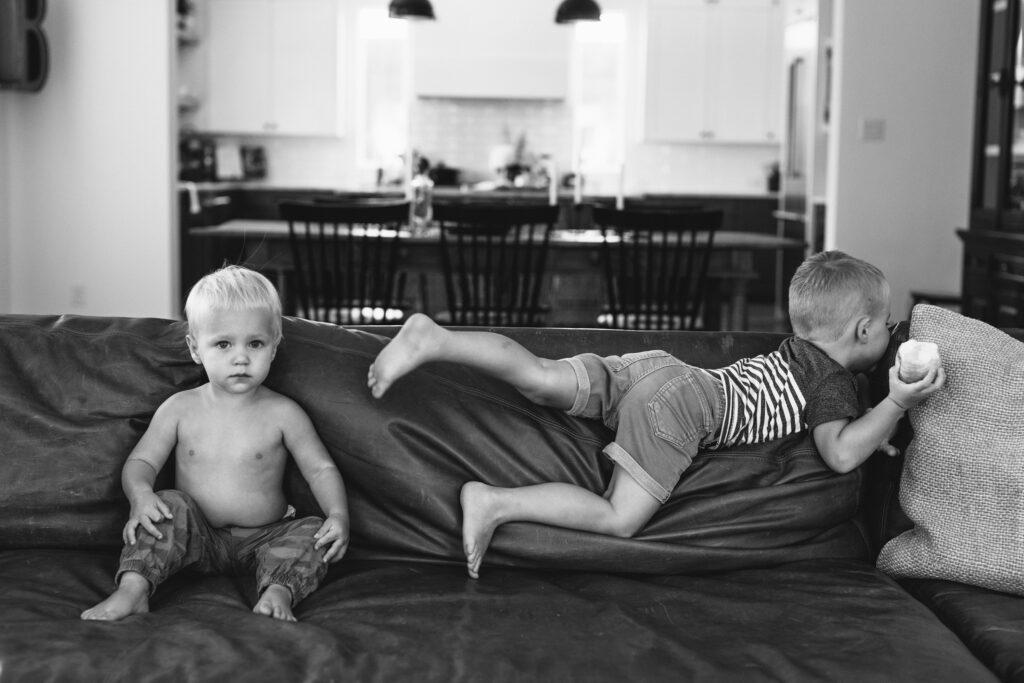 Upholstery is an obvious consideration. Stain resistant fabric is quickly becoming more readily available among big box stores like Crate and Barrel and Restoration Hardware. Crypton and Nanotex are both commonly used treatments to make your fabric as kid proof as fabric can get.

I once had a custom sofa ordered for a friend and when it came time to select a fabric, she admitted she really wanted a lighter shade. Despite the fact that she has two young boys and two cats, I suggested a WHITE Crypton weave I had personally used before (our corner arm chair). Her husband was more than skeptical. He did his own soil test with the sample and then decided to relinquish control because it had held up to his torture. A few months ago, my friend was holding her 18 month old son while having a glass of pinot noir on the couch. I am sure you can guess where the story leads next. You guessed it, the entire glass ended up on the WHITE couch. She actually texted and said she was so stressed, she just went to bed. Ha! Which, for the record, is not how Crypton recommends handling stains. Low and behold though, it all came out the next day. So, even though it might cost more than a running line option, it’s worth the investment when considering children and wanting your furniture to have longevity.

At our house, we have found leather to be an appropriate choice for our family. We don’t stress about scratches, just adds to the character. It also doesn’t hold smells, which is a serious plus. My kids definitely snack on the couch and it’s held up to the regular vacuuming.

For the non-stain treated fabrics, I swear by Folex carpet cleaner (link below!). It is basically a stain magician in a bottle. This stuff works on carpet and upholstery and I can attest to it’s success against all sorts of things I’d rather not mention here.

On the topic of textiles, I’ve preached this before, but 100% wool rugs are stain resistant. That means, that the beautiful, vintage rugs you’ve been eyeing on Pinterest are in fact more durable than any nylon option. For more on that, click here. 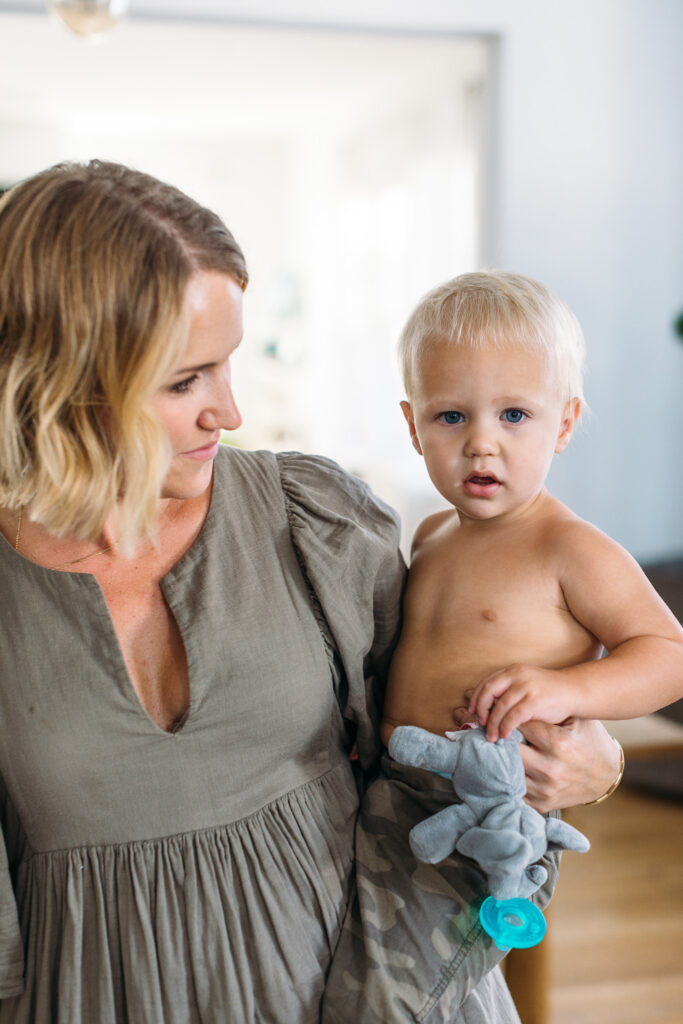 I’ll admit, I was not someone who was excited about childproofing cabinets. However, the magnetic ones are very discreet and work like a charm. They were certainly worth installing with three small kiddos running around. They’ve since gotten even easier to install with 3M strips on the back, so no permanent holes in your cabinets!

Speaking of intentional childproofing, I make a conscious effort to keep the furniture where the kids eat the LOWEST priority. We’ve had the same Target counter stools since we moved in, and they’re pretty embarrassing (the dirt between the cracks guys..). But I have zero intentions of swapping those out just yet. There’s no stress about them, they were SO affordable and they’re actually fairly bulletproof. The kids climb and hang off of them and the spills have been minimal. They also take a Clorox wipe like a champ.

I’d also suggest keeping any eating surfaces VERY cleanable. My dining room table is antique, but I don’t stress about stains (again, adds to the character). It goes without saying that marble has a terrible reputation for durability in kitchens and yet, I don’t fuss about that either. They eat at our marble counters every day, and there hasn’t been a stain that hasn’t wiped clean. 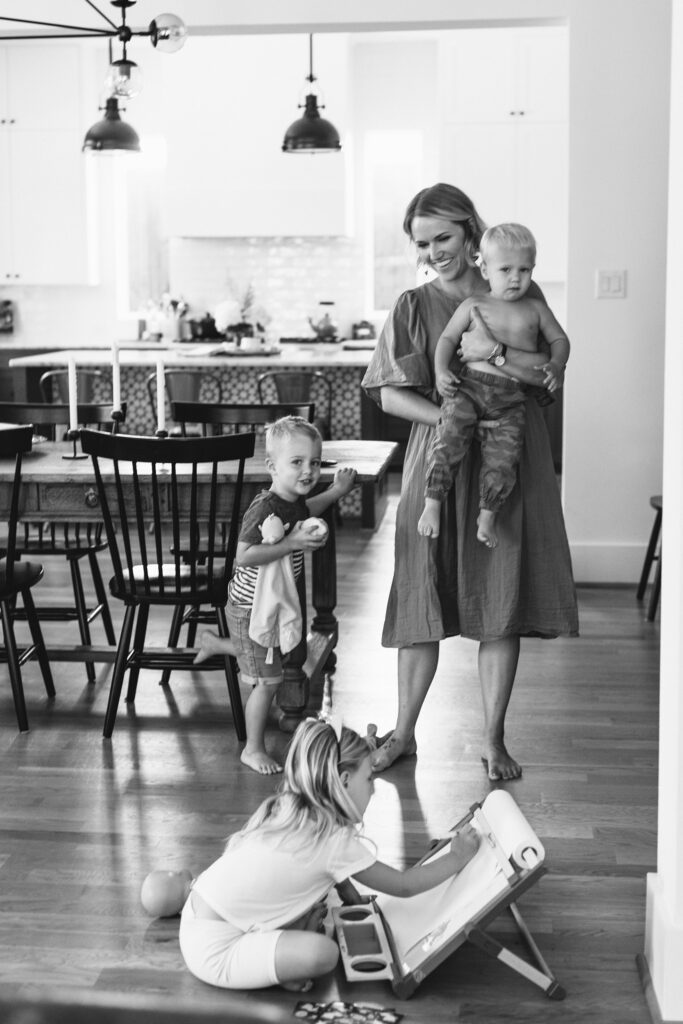 For early walkers, corners can be nerve wracking. Investing in a round, quartz top coffee table was the way to go. It’s wipeable, sturdy, and there are no sharp corners to fall into. Obviously an upholstered ottoman is another great option, we just happen to eat quite a few dinners at ours, so it depends on your family’s habits.

As our kids got older, I loosened up a little bit on a few things. I purchased the vintage orchard ladder for blankets, but not without attaching it to the wall for safety. The zip ties linked below are actually universal and can be attached to most furniture pieces. This is so important, as kids climb everything! It’s worth the peace of mind to know that even if they do, furniture won’t come down on them. When in doubt, zip tie it to the wall. 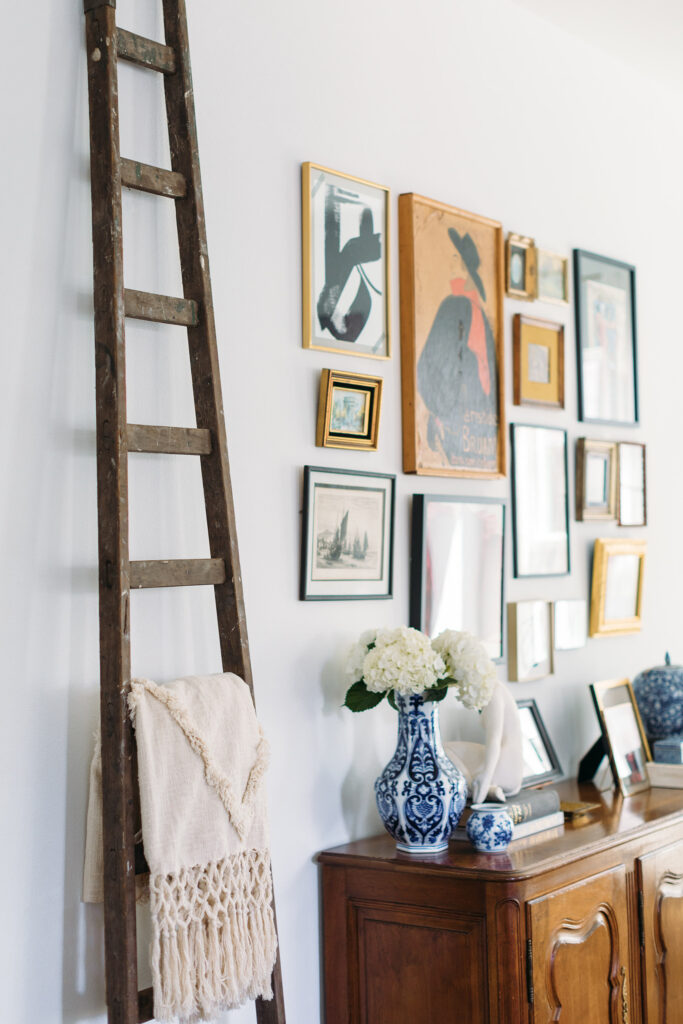 In general with bookshelves, I lean towards options that can be attached to the wall as well. cb2 has a great option that I have used so many times and I recently found a larger unit on Wayfair for another client. My husband was always concerned about our kids climbing on the shelving, and especially the ladder. I think with things on the bookshelves, they’re often deterred from attempting.

On that note, any accessories placed down low aren’t breakable. Not everything can be bulletproof, but I do try to keep the brass paperweights up out of reach so no one gets it to the side of the face. Sure, there were times I had to remind them that Mommy’s pretties weren’t toys, but I don’t have to do that much anymore. 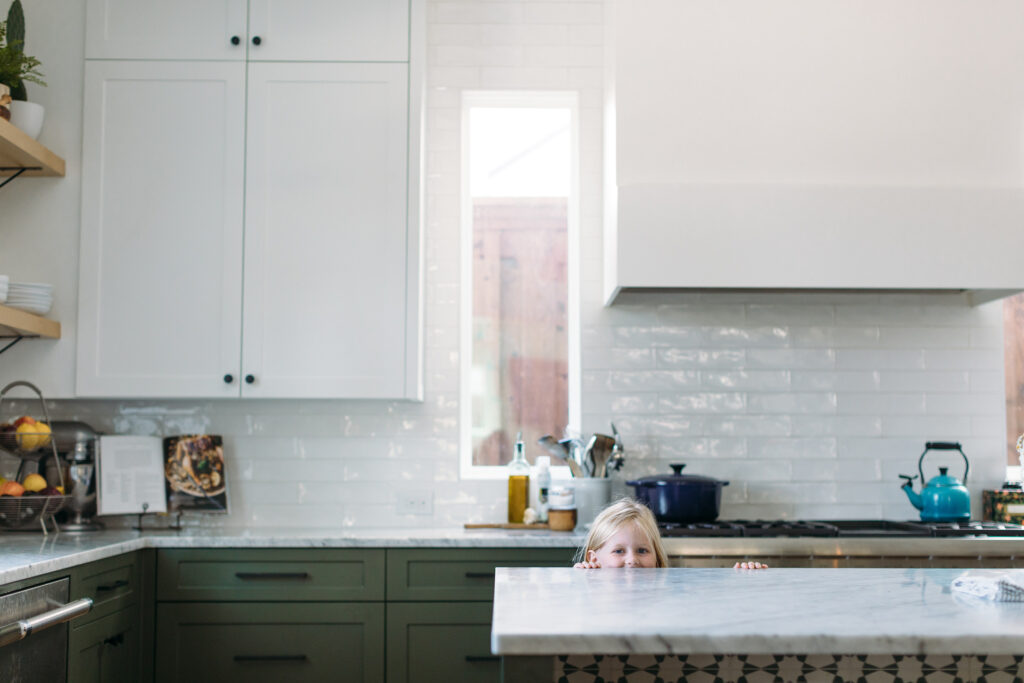 I also think creating a designated space for them to go nuts has worked well for us. I purchased a Nugget after seeing rave reviews about it and my kids love it. They can tumble and jump on it and it’s held up to them. Nugget isn’t integrated with Like To Know It, but it’s too good not to share. I also got them a steeple ladder. It hangs from a heavy duty D-Ring from a ceiling truss and our kids get a lot of their festered, physical energy out by using it to climb. It was a quarantine purchase my husband rolled his eyes at, but it gets used every day and they have a blast with it!

I am no child-proofing expert but I think generally speaking, I am pretty unfussy about it. Nothing in our house is too precious but also, I’m not living in a preschool because I believe your home environment affects your morale. So we talk to our kids about being respectful with their belongings, and ours too. Sure, accidents happen and will continue to happen, but that’s a part of their learning process. Typically speaking, they learn from the really bad mistakes and it is usually something that doesn’t happen again.

I’m linking the things I mentioned above here:

*This post contains affiliate links, which means I may receive a small commission if you decide to purchase an item. It does not change the price of the item.